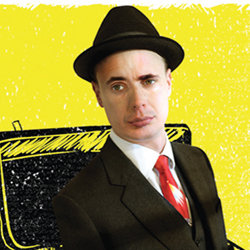 Asher Treleaven's latest offering is an autobiographical show that asks the question, 'is my life interesting enough to talk about for an hour?' then uses Edward De Bono's Six Thinking Hats to answer. We follow Asher from the outback to living in Byron Bay, being kicked out of drama at age 14, through his circus days to now. ***** (TheAge.com.au) ***** (ThreeWeeks) **** (Comedy.co.uk). '...confirms Treleaven as one of the most interesting new comedians to have appeared at the Fringe in recent years' (Guardian). 'A post-modern Barry Humphries' (Australian).

One time Edinburgh Comedy Award and two-time Barry Award nominee Asher Treleaven's latest offering, Troubadour is an autobiographical show structured around Edward De Bono's 'Six Thinking Hats Method'. Troubadour tracks Asher's life from an unassisted birth to Pink Floyds' Welcome to the Machine to now, all the while asking the pivotal question: "Is my life interesting enough to talk about for an hour?"

Troubadour will follow Asher from living in Australia's outback to his time at the National Institute of Circus arts through a recent brush with testicular cancer up to now. Troubadour is a reflection on the choices we make in our life, but ultimately it's a life affirming show about making the most of the time you have.

Asher is truly a rare comedic creature - his blend of physical comedy, stand-up and his burgeoning sense of socio political satire have made him one of the most exciting comics on the circuit - join him now for what is promising to be his best show yet.