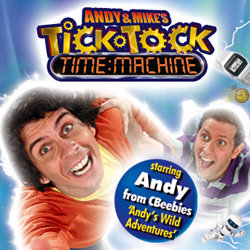 Andy Day from CBeebies' Andy's Wild Adventures stars alongside Mike James. Following their smash-hit show, Andy and Mike's... Big Box of Bananas they bring you another adventure - this time they have a time machine! They're sent on a quest to collect things from the past and the future. Will they make it back to 2012 or be trapped in the mists of time forever? One thing's for sure, they haven't a chance without your help! 'If I could go back in time and watch it all over again I would' (Justin Fletcher).