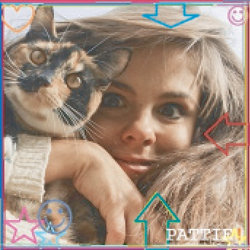 Pattie Brewster is just another normal, non-creepy and ok little person. A YouTube film sensation and author of several self-help books (not for publication, just for her), she covers all the hot topics of the day, like environmental, political and cats. Catch her showcasing her investigation into human friendship, its mystical and friendly secrets, plus how to make it (safely). Expect nice times, other things and possibly friendship. ***** 'Knits me the biggest stuff! And sleeps in my bed ' (Cat). *** 'I know I love her' (Kitty). 'Oh hey guys!' (Pattie Brewster).

Pattie Brewster is a YouTube film sensation and the author of several self-help books (not for publication, just for her). More of a "stayerin-ner", Pattie works from home and has learnt how to order cat-food online, so has few reasons to leave the house. She also finds other people difficult to read. Like Chaucer, and Wingdings.

"You know when you've targeted a potential friendship candidate, But they just act like you're the weird one? Right? They won't come near you and they don't let their pets wear anything you've made them"

Meeting people socially is a great struggle for her, though she's aware that she had a late start:

"Most people begin making friends in infancy, during the early childhood explorative stage of psycho-social development. But I actually got started in 2010. Basically I was just getting on with quite a lot of stuff before then."

This summer however, Pattie has finally started leaving her house to investigate what friendship really means, plus how to make it (safely). Her debut Edinburgh show will reveal her hard-hitting findings to the world: combining instructional friendship videos, tips, tricks and bribes to make the audience like her, vox pops interviews with members of the public, and an exciting name badge section.

"Three words to describe me?... 'Ok' I guess?... 'alright' maybe?... oh and 'absolutely fine'. Though should say that I was voted sneakiest in my high school year book. Sneakiest, plus also the crappiest and the most shit. We had a rubbish year book because I was home-schooled."

Pattie Brewster is written and performed by Amy Hoggart, who will also be taking part in Simon Munnery's La Conepta throughout August.

Amy started writing and performing comedy with the Cambridge Footlights. Since then, she has taken part in a number of pilots including BBC3's Laughter Shock, where she met Sarah Campbell. They have filmed two sketches for BBC Online, and took their first full length show Christmas For Two: Friends With You to Edinburgh last summer.