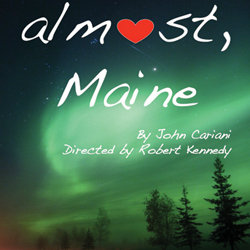 On a cold, clear, moonless night in the middle of winter, all is not quite what it seems in the remote, mythical town of Almost, Maine. As the northern lights hover in the star-filled sky above, Almost's residents find themselves falling in and out of love in unexpected and often hilarious ways. Knees are bruised. Hearts are broken. But the bruises heal, and the hearts mend, almost, in this delightful midwinter night's dream. Almost, Maine is presented by the Amity Creative Theater (ACT) of Woodbridge, Connecticut USA. This is the ACT's Fringe debut.