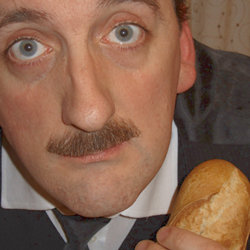 Storytelling performed on the following days in August 2012...

Unmissable! Croft and Lloyd's outrageously funny adaptation of the hit BBC comedy. Follow Rene, the hapless cafe owner in war-torn occupied France, as he struggles to retain a priceless portrait stolen by Nazis and hidden in a sausage in his cellar. Rene is hiding two British airmen and is endeavouring, with the Resistance, to repatriate them. However, communications with London through a wireless disguised as a cockatoo add to his many embarrassments. From the producers of Fringe smashes Jean Brodie ***** (ThreeWeeks), Trainspotting ***** (Edinburghguide.com), Sex, Lies and Eurovision ***** (ThreeWeeks), The Steamie ***** (BritishTheatreGuide.info).