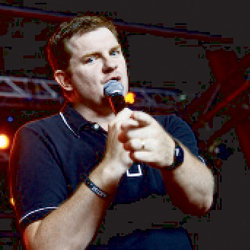 Now living in Sweden and following a five year absence from Edinburgh, it's time for the Kiwi who has won comedy awards in Australia, the UK and Sweden to make you laugh once more. He has missed you, now don't miss him. From his first words it was like the audience was on laughing gas, genuinely caught up in the performance. 'Great stuff' (Chortle.co.uk). 'Free-wheeling genius' (Sydney Morning Herald). So come and experience this 'hysterical comedy force' (Time Out) and his tall tales of tiny triumphs.

Kiwi Al Pitcher returns to the Fringe after a five year absence with his delightful new show Tiny Triumphs.

Two years after his 2007 critically acclaimed show, Al moved to Sweden with his Swedish wife. He didn't know how his comedy career would pan out there, but it turned out rather well and in 2011 he won Sweden's most coveted comedy prize, "Svenska Stand up Galan's" Best Male Comedian in Sweden.

Al has also won comedy awards in Australia, the UK and was the creator of the cult hit The Al Pitcher Picture Show which toured all over the world in 2009 and 2010, giving Al's unique take on pictures of the mundane and ridiculous (look here for a taster).

Now he's back to make you laugh once more. He has missed you, now don't miss him and his tall tales of tiny triumphs.

In this show, Al reflects on how sometimes, the small things that we achieve in life can be the most important. How when we look back, it can be some of our more modest achievements that really shine through and make us what we are.

Using his signature combination of fast-firing gags, and silly tales, audiences can look forward to an hour of laughter, with razor-sharp wit and quirky stories from this zealous and gifted performer.

Al's quirky, surprising, absurd yet crowd-pleasing delivery makes for an exceptional show, and with his positive and upbeat look at life, what more could you want from your hour?