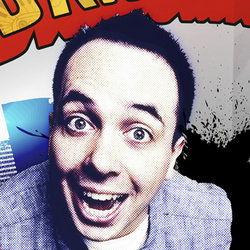 This year, Abandoman is writing a hit single for the radio - and you're providing the lyrics! Fresh from touring with Ed Sheeran, the award-winning rapper is looking to score his own chart topper - and as always, audience participation is essential. Come to the show, drop your suggestions in the ring and watch as Abandoman makes musical magic. Or, simply sit back and listen as Abandoman improvises, writes, plays and sings songs on never-before-seen futuristic instruments. "Flight of the Conchords meets 8 Mile... Nothing short of genius" (Chortle.co.uk).

Last year, they re-invented hip hop. This year, Abandoman are writing a hit single for the radio - and you're providing the lyrics! Fresh from touring with Ed Sheeran, award-winning Irish one man hip hop band, Abandoman (Rob Broderick), is looking to score his own chart topper - and as always, audience participation is essential. Come to the show; drop your suggestions in the ring and watch as Rob makes musical magic, creating hilarious raps and musical sketches at lightning speed. No two shows will be the same.

This year saw Abandoman as multi-platinum artist Ed Sheeran's main support act on his sell-out UK tour that culminated in two nights at London's Brixton Academy; in February this year, Rob performed in Australia for the first time, where the show was nominated for the two comedy awards at the Adelaide Fringe Festival ("Best Comedy" and "Best Comedy Newcomer") and won the latter.

Abandoman has appeared on BBC Three's Live at the Edinburgh Fringe Festival, BBC2's The Stephen K Amos Show, on Sky Arts as part of their Latitude coverage and many radio shows, including BBC Radio 1's Fun And Filthy Cabaret, alongside Dappy from N Dubz.

The show has recently appeared at festivals such as Bestival, Latitude, Altitude, Rockness, Glastonbury, Hop Farm, V Festival. They performed at the 2010 Brits after-party, Daisy Lowe's 21st birthday party and have opened for numerous comedy and music acts such as Micky Flanagan, Tommy Tiernan and DJ Yoda.

During last year's Edinburgh Fringe Rob also featured in The Wrestling, which went on to win the Spirit of The Fringe award at the Edinburgh Comedy Awards, and was nominated for the Innovation awards at the Chortle Awards 2012.

This year Abandoman are due to perform at Camden Crawl, Udderbelly @ Southbank and Camp Bestival amongst many other festivals. They are also performing at the Breakin' Convention - a breakdancing event in May.