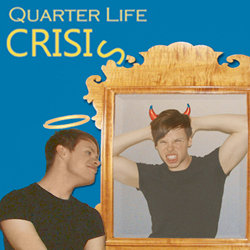 Ever felt crazier than Mel Gibson in a synagogue? You may have had a Quarter Life Crisis! Three quarters of 25-year-olds have experienced the phenomenon sweeping the nation quicker than Bieber-fever. As twenty-nothings leave university they are facing a world with no jobs, no hopes, no Woolworths. More than just interactive stand-up, join Aaron to tackle his issues and diagnose yours. Be a Britney; not a Whitney. 'Certainly one to watch out for' (Artshub.co.uk, Scotsgay Pick of Free Fringe, 2011).