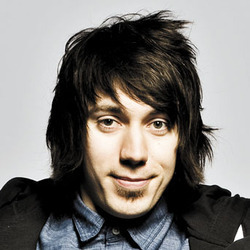 Radio 1 DJ Tom Deacon, whose slick stand-up has featured on The Rob Brydon Show and Dave's One Night Stand, returns with a brand new show. Tom, like most people, had some very awkward moments in the last year, mainly brought on by himself. He picked up some pet hates and a new girlfriend from the north of England - well, we all need to do our bit. He'd like to be honest with you, if you're ready for it. 'Looks, confidence, charm and great material, expect other comics to lynch him' (Sunday Times).

Radio 1 DJ Tom Deacon, whose stand up has featured on The Rob Brydon Show for BBC Two, Dave's One Night Stand for channel Dave and Edinburgh and Beyond for Comedy Central returns to Edinburgh with a brand new show, Can I be Honest?

Tom has always been told honesty is the best policy, but who's to say that's true all the time? Especially when he's spent his life bottling up his annoyances like a fine wine. Now Tom wants to unleash his anger and let the world know what's annoyed him. Living with the lads he's learnt a valuable life long lesson that he'd like to pass onto as many people as possible and now, finally, he's going to say what really needs to be said about the important things in his life... things like 'Effort Fruit' and 'Printer ink cartridges'. In the past Tom has been too honest with his mates. Sometimes he's too honest with his girlfriend. Sometimes he's even too honest with his audience. Now Tom would like to be honest with you... but only if you're ready for it.

Since March 2010 TOM has been the host of his own Radio 1 show which broadcasts every Sunday night featuring music and chat from celebrity guests. He first burst onto the comedy scene as the winner of Chortle's Student Comedian Award and as a finalist in the Amused Moose New Act Competition. He's since presented 5:19 - a youth orientated show for BBC Switch featuring comedy sketches, music and celebrity shows and took part in the Edinburgh Festival's longest running group comedy show, The Comedy Zone, which previously launched the careers of Dave Gorman, Harry Hill, Stewart Lee, Al Murray and Ross Noble.