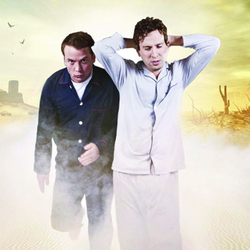 A comic thriller about aliens and the quest for glory. 'The Pajama Men create a cartoon of the mind, a shape-shifting world in which anything seems not just possible, but imminent.' ***** (Guardian).

Following the side-splitting debut of their brand new show In The Middle Of No One at the Melbourne International Comedy Festival earlier this year, The Pajama are set to make a triumphant full season return to Assembly.

Laugh-til-it-hurts funny and totally indescribable, The Pajama Men need nothing more than their jim jams and an endless assembly of voices to keep audiences howling with mirth and crying with laughter.

In The Middle of No One sees a group of friends sail a ship around the world in search of things most people have never even seen, let alone know about. Hell breaks loose when members of the team become possessed by the transient ghost of a dead submarine captain who jumps between their bodies at will.

Meanwhile, a heartsick space traveller - halfway to Jupiter - forms an unlikely friendship with his philandering girlfriend's husband. There are also a couple of dudes lost in the jungle of their own minds.

Note: This show description is subject to change. Completely.

Over the past seven years the PJs have won numerous comedy awards, critical acclaim and cult-like following across the US, UK and Australia. They cut their improv teeth with Second City, the legendary Chicago theatre group that spawned the likes of Mike Myers, Bill Murray and John Belushi.