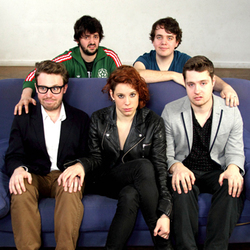 Comedy showcase The Lunchtime Club returns to the Edinburgh Fringe with another collection of the finest new talent having already uncovered some of the UK's brightest up-and-coming names since it began in 2009.

Set up by Jon Briley of Best Medicine Management as a means of nurturing the next era of comedy talent, The Lunchtime Club has become a staple of the Edinburgh Fringe over the last two years with a focus on giving a platform to the next-in-line to the comedy throne.

This year's lineup includes award winners, rising stars of radio, authors and more. They are:

- Max Dickins: Snapped up early on by Absolute Radio and duly received a Rising Star nominee in the Sony Radio Awards. Two-time Chortle Student Comedian of the Year finalist who has written for Channel 4's This Just In and BBC's Dick & Dom's Funny Business. Was named as one of The Sun's Top Comedy Picks for 2011 and is also appearing in debut sketch show Dregs at the Underbelly.

- John Kearns: A regular on The Greg James Show (BBC Radio 1) and described by Spoonfed as an 'excellent, surrealist ranter'.

- Joe Wells: Award-winning comic who authored Touch and Go Joe, a book on Obsessive-Compulsive Disorder (OCD) that charted his battle with the condition which sold 5,000 copies and was translated into two languages. Recently reached the Hackney Empire New Act of the Year final and his material is heavily influenced by socialism.

- Suzi Ruffell: Nominated for Leicester Mercury Comedian of the Year 2011 and is 'definitely one to watch' according to Time Out.

- Fin Taylor: Laughing Horse New Act of the Year semi-finalist who was voted 'One To Watch' by Venue magazine and is very, very good' according to London Is Funny.

The Lunchtime Club has been widely cited as one of the most prestigious and reliable showcases of new talent at the Fringe, bringing a talented and varied collection of stand-ups to the Tron. Bag the bragging rights and impress your friends with knowledge of the next acts set to make it big!