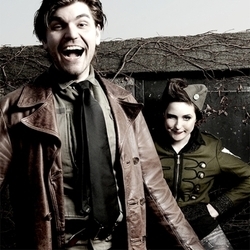 John-Luke Roberts and Nadia Kamil are The Behemoth, and they bring back their ingenious, intellectual, hilarious material that made them a smash-hit during their three previous runs at the Fringe. They're armed with a brand new show and ready to reclaim their mantle as the number one duo at the Edinburgh Fringe. Joyful surrealism and knockabout comedy at its best.

The pair took the circuit by storm with their striking material and off-the-cuff delivery, with Daniel Kitson describing their 2006 show, Staggered Spaces, as his "favourite thing" of the Fringe. Their 2007 show, The Gently Progressive Behemoth, was nominated for a Chortle Award for Innovation, and their 2008 effort, The Wizecrackin Mindsqueezin Behemoth was one of The List's Top 20 unmissable shows.

The duo are established in their own right. John-Luke supported Josie Long on her nationwide tour in 2009, and his debut solo show as part of The Invisible Dot's programme, John-Luke Roberts Distracts You From a Murder, was a critical hit at the Edinburgh Fringe last year. He boasts a host of radio credits including Spats for BBC Radio 7, which he wrote and presented, and he writes regularly for shows such as The News Quiz and The Now Show. He is also an accomplished theatre writer and trained on The Royal Court Young Writer's Programme.

This year, he set up The Alternative Comedy Memorial Society with The Penny Dreadfuls' Thom Tuck - a fortnightly comedy show that is "genuinely alternative, and properly comedic" (The Guardian). Nadia is a founder member, and regular performer at the club.

Nadia also wrote for Spats, performed in Channel 4's sketch offering Happy Finish and has numerous screen credits as an actress including Two Pints of Lager and a Packet of Crisps. Her talents have also been employed for radio, including shows such as BBC Radio 4's It's David O'Doherty Time and Look Away Now, and BBC Radio Wales' What's The Story.