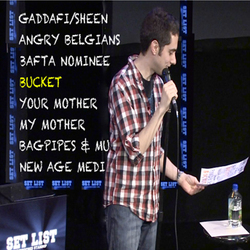 A Whose Line Is It Anyway? type challenge for stand-up comedy! Comedy pros are handed an original, never-before-seen set list of topics, partially written by you, as they walk onstage to create a spontaneous, original stand-up set before a live audience! Each new set list is projected onscreen, so follow along, get inside the minds of comedians and watch how each crafts their own particular style of comedy right in the moment of creation. A playground for the comedy brain! Top names and bold new talents on every show.