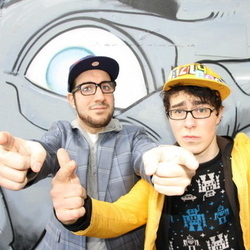 Music performed on the following days in August 2011...

Sanity Valve are really good at rapping. Mos Prob - the thoughtful, sensitive prodigal son - does the rapping and Gishnchips - the confrontational human hurricane with a sordid past in shooting loads of people - does the rapping. Together they form Sanity Valve and they rap about things. They rap about being brilliant with women and killing loads of people, which are two of the things that they do. Watch these 'wordsmiths of the highest order' (Tuborg Comedy Awards) do what they do better than everyone else - for free.