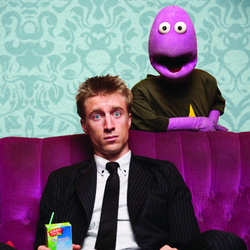 Winner of Best Show at the 2010 Melbourne International Comedy Festival and following sell-out shows at the Sydney Opera House, this hilarious tale of domestic misadventure makes its UK debut at the 2011 Edinburgh Fringe. Sammy J and Randy are housemates and best friends - but when Sammy's legal work uncovers a skeleton in Randy's closet things are set to become awkward at the breakfast table. From the acclaimed duo behind Sammy J in the Forest of Dreams. Another brilliantly executed musical extravaganza that's raucous, witty fun from start to finish (Chortle.co.uk).

From the acclaimed creators of the smash-hit cult comedy Sammy J in the Forest of Dreams comes a brand new musical comedy spectacular featuring Sammy J (skinny man, on the left) and Randy (purple puppet, the one on the right) as they navigate life in a share house. But when Sammy's work as a tax lawyer uncovers some financial skeletons in Randy's closet, things are going to get awkward at the breakfast table...

Winner of the prestigious Barry Award at the 2010 Melbourne International Comedy Festival, and following sell-out shows at the Sydney Opera House, upgrading to bigger venues and adding extra shows in Australia, this hilarious tale of domestic misadventure makes its long awaited UK debut at the 2011 Edinburgh Fringe.

With all previous shows sell-out 5 star hits at the festival, Sammy J and Heath McIvor bring yet another original show to Edinburgh and will undoubtedly once again be the talk of the Fringe.

Sammy J is becoming a Fringe legend and in Australia his songs can frequently be heard on TV and radio. Sammy has been involved in several productions at the Fringe over the years including his own solo shows as well as the hit theatrical production Breaker Morant alongside fellow Aussies Adam Hills and Brendan Burns. Sammy's album Sticky Digits, recorded live at the Spiegeltent, is available now through iTunes. Sammy enjoys working alongside Randy as he believes himself to be the better looking one.
Sammy's solo show, Potentially, is also apparently at the Fringe this year...

Heath McIvor: At the 2009 Fringe Festival, Heath became renowned as one of the world's most talented puppeteers with Randy's Postcard's From Purgatory. His career in theatre, film and television spans over the last 11 years and Heath often visits Cambodia to run puppeteering workshops with deaf children. Randy first arrived in Edinburgh in 2008 where he popped up at a few late-night spots and now he returns for his second hour-long solo show as well as once again appearing with the skinny man, a painful notion now that he is sober.