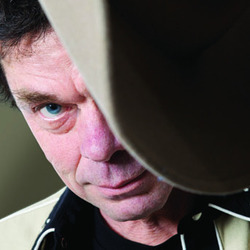 Strident apocalyptic invective. Fabulations. Rich returns to Edinburgh after a sell out tour of the UK with a new show in a sweaty venue. Bad people welcomed. 'Creeps up on you and ambushes your funny bone like no one else' (The Scotsman).

Star of the critically acclaimed BBC 4 documentaries Rich Hall's The Dirty South and How The West Was Lost plus Channel 4's topical late night show Stand Up For The Week, Edinburgh Fringe favourite and Perrier Award winner Rich Hall returns to Edinburgh Festival in 2011 with a brand new show. Rich will be performing nightly throughout the Festival at the Pleasance Grand at 9.40pm.

Rich Hall's renowned grouchy, deadpan style has established him as a master of absurdist irony and king of rapid-fire wit. Fans can see the comic genius from Montana discuss a variety of topics all delivered in his own hilarious unique way. Since appearing in the guise of his redneck alter-ego Otis Lee Crenshaw in 1998, award-winning Rich has won critical acclaim across the Globe by performing to sell-out audiences each year at the Edinburgh Fringe, throughout sell-out UK tours and at comedy festivals worldwide.

Rich has also become well known for his television and radio work. Notable UK appearances include regular appearances on Stand Up For The Week (Channel 4), QI (BBC1/2), Live At The Apollo (BBC1), Channel 4's Comedy Gala live at The O2, Have I Got News For You (BBC1), Rich Hall's Cattle Drive (BBC4), Rich Hall's Gone Fishing (BBC4), Otis Lee Crenshaw - London Not Tennessee (BBC2) and Never Mind The Buzzcocks (BBC2).

Rich Hall will also be performing a second show at this year's Fringe when he takes to the Pleasance Grand stage immediately after his 9.40pm show with Rich Hall's Hoedown. Performing nightly at 11.15pm, punters should expect a late-night mix of music, comedy and gratuitous colorations with some very special guests.