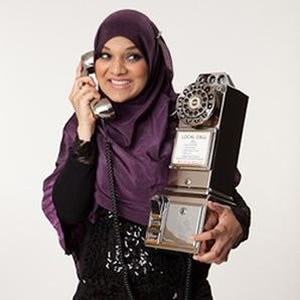 Comics are often told that to make a proper splash at the Edinburgh Fringe you've got to have a theme, and raise a few issues, get people thinking. Sadia Azmat has a useful head-start in this respect as for the last few years she's been working in call-centres of varying descriptions, and offers some useful advice for those who've been flummoxed by the things over the years, i.e. absolutely everyone.

Taking on her first Fringe, Azmat has tapped into a rich comic vein here. It's a topic that crops up regularly on stand-up stages but usually only from the punters' point of view, whereas she's more than happy to divulge a few trade secrets. The anecdotes about her days in the insurance-selling game confirm how unscrupulous such firms can be.

As an Essex-born Asian she also has an interesting point of view on that most touchy of customer service-based issues, the Indian call-centre, and in the second half of this show moves on to more general cross-cultural issues, her difficulties in the UK job market, and the requisite Asian mum gag (but with a nice callback).

Given her relative inexperience Azmat is a confident, calming presence onstage and off, with an impressive quillful of quips and set-pieces. Structurally this debut is well-designed too - it's directed by Fringe veteran Deborah Frances-White - with a fine flow, a splash of improv and a well-designed ending, including an enjoyable dig at a few big-name comics.

It also clocks in at a pleasingly concise 30 minutes, in a workday lunchtime slot, so she won't keep you tied up for long.

Listing for Please Hold, You're Being Transferred to a UK Based Asian Representative