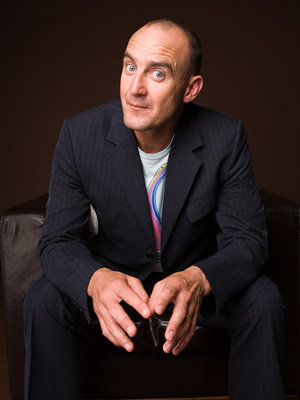 Jimeoin is the master when it comes to generating laughs from facial expressions. Just raising an eyebrow he can have you chuckling away. Once you laugh, he's hooked you in for the hour. He covers topics that other comedians most likely wouldn't touch, given that on first impression they appear to lack any new comedic substance: things like revolving doors and toes. Toes are by no means a stomping ground for comedy gold, but Jimeoin makes the topic funny, and he does so incredibly easily.

He has that rare talent of being able to carve out some of the funniest material
from the simplest observations. Quite often you could argue that his observations are worryingly bland, but he still generates some laughs. Yes, we know all about socks, lifts and that key in your house which you have no idea what it's for, but it's his unique spin on things that makes them funny.

What I will say, however, is that there is only so much of this simple humour one can take, which is why this show just falls shy of 4 stars. It is great entertainment but you have to wait until near the end for a change of style. Who here knew he was also a musician? See classic hits like What? and Asparagus Makes Your Piss Stink. Also keep an eye out for some nice eye-guitar co-ordination. You'll know it when you see it.

I'll leave you with one of his handy hints: Never smile when going to the toilet.