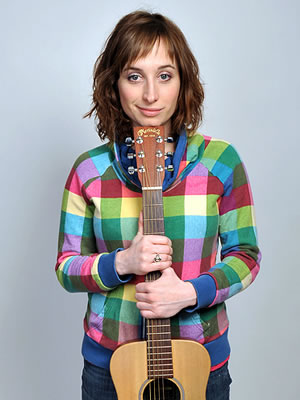 It's perhaps slightly surprising that Isy Suttie is still nestled away in a low-key 5pm slot despite being quite a well-known telly face these days. But then she hardly seems the sort to aggressively take on the various Russells and Byrnes for UK stand-up dominance, unless we've massively misread the situation and that winsome likeability masks a fierce Anne Robinson-style manipulative harridan who secretly craves a daily star vehicle where she can be horrible to strangers. Seems unlikely though.

Having toured with her supermarket-based tale - and old Fringe show - Love Lost in the British Retail Industry last year, she's gone for true love this time. In Pearl and Dave she tells us revealing snippets about her own relationship ups and downs over the years (some of it involving a fellow comic - hefty clues abound) while primarily focussing on the titular duo: her geeky old neighbour and a girl he met on holiday. This unfolds via their various Facebook messages and Skype conversations, which the guitar-wielding comic skilfully weaves into song.

Well, we call it 'true' love: Dave is introduced via some touching childhood anecdotes early on, so one hopes he does actually exist (and when I say 'touching ' I mean in the sentimental sense - as Suttie points out, paedophilia didn't really seem to exist in the 1980s). But then the title is a bit convenient and how would the real Dave feel about his somewhat bittersweet love-life being guffawed over at the Fringe every night, albeit in a low-key 5pm slot? And then there's Pearl, who turns out to be quite a naughty girl...
But this is all conjecture, and just serves to emphasise how well-observed Suttie's characters are, imagined or otherwise. Come five-to-six you're rooting for them to live happily ever after, while not really knowing what sort of state our heartstrings will be in afterwards.

Isy Suttie, then: manipulative, but in a good way.