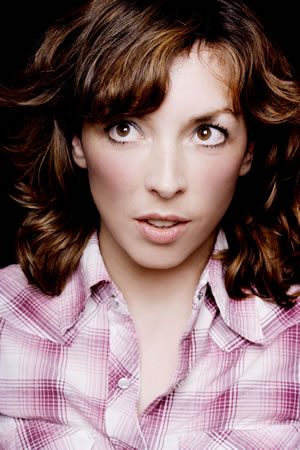 For those unfamiliar with Christie's work, the opening to this splendid show might be a tad off-putting. On she bounds, complete with a cardinal's gown and communion wafers which look suspiciously like regular little crackers (mmm, Jacobytes), then does a little dance and generally fosters a look of morbid terror on many of those present. Is the Housewife Surrealist going to spend an hour larking about like a bad revue?

No she isn't, but then this is far from your regular stand-up show, as she veers from serious chats about faith to bonkers prop gags and somehow makes it all work as a coherent whole. The overall theme is her own catholic faith, which makes a refreshing change from the now prevalent 'aren't religious people stupid (apart from Muslims obviously - you guys carry on)' angle.

Christie has a sensible modern attitude to the Jesus business: she's very attached to the customs and costumes, but is equally convinced that more sci-fi elements like the ascension are prime arse. Which is handy, given that she's married to an atheist.

Actually the numerous mentions of her husband are juicy nuggets of the finest gossip for any comedy anoraks present, as Christie is married to one of the UK's best-known stand-ups, who is also playing at The Stand all month and is so popular that the venue's answering machine features a special 'please stop asking about tickets for him' message. So the insights there are a little added bonus.

Not that the show needs it, as Christie is a captivating, energetic presence. She begins the show like a female Paul Foot, and all the mannered madness that entails, easily switches to more serious mode, then dabbles in puppetry and even a high-concept model-based action sequence. It's entirely plausible that such sublime madness will get bloody awful reviews elsewhere, but not here. Wonderful stuff.