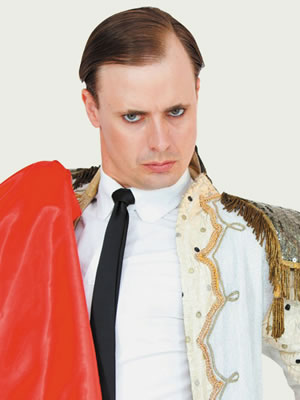 Clown Prince Asher Treleaven doesn't like racism. But, ever the pedant, what really angers him is inaccurate racism. When someone wishes him luck "eating dog meat and hanging out with Chinks" in Vietnam, Asher is too shocked and afraid of confrontation to point out that the correct slur is actually "Gooks". There's little worse in life than erroneous bigotry.

This is why Asher created The Matador: a superhero capable of challenging such surprise encounters with racists. Alas, The Matador's faux-Spanish accent and impressively bulging crotch implicate the character as a stereotype, signalling that even the most well-meaning of us can be, unexpectedly, a tiny bit racist.

Asher is the ambassador of a delightfully homemade world. His circus-schooled prancing and precision preening takes place on a set made from greengrocer grass, plastic roses, a garden gnome and a lawn flamingo. In a story about being lost in the Vietnamese jungle while wearing nothing but a pair of swimming trunks, he reports that scooching along the floor of such a jungle results in "crud and ants and biscuit crumbs" being collected in the trunks. Somehow, it is perfectly reasonable to expect biscuit crumbs on the jungle floor of Asher's mind.

For all his lampooning of traditional comedy stylings ("Hey shit head. Hey, dick leg. Where do you work? Fuckin' shit place?" he says to nobody in particular on the front row) he is a surprising dab-hand with observational comedy. He points out in a very throwaway fashion that sheep have human teeth. If you think about it, sheep really do have human teeth. But how did he notice that? And how do we recognise it?

Perhaps the show's stand-out set-piece is a song about rednecks to the famous show tune, My Favourite Things. Not only is the unexpected musical number a comprehensively-researched list of slurs, it is a fairly breathtaking feat of memory.

Matador tackles the important issues of racism and tolerance head-on, but surrounds them entertainingly with a surreal hedge maze of playful stories and one-liners. A well-handled and enjoyable fourth solo show.