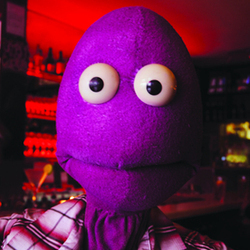 From the award-winning puppeteer and co-creator of Sammy J in the Forest of Dreams comes an all-new comedy show starring Randy, the felt-faced misanthrope. 'Randy proves that performers made of foam can give their human counterparts a run for their money' (List). Heath McIvor's last solo show, Randy's Postcards From Purgatory was the cult hit of the 2009 Edinburgh Fringe, selling out its entire run and launching Randy unceremoniously onto the world stage. 'Razor-sharp and sublimely funny' (Scotsman). 'Heath McIvor is a puppeteer genius' (Herald).

We were all so excited at the prospect of seeing one of the world's leading puppeteers return to the Fringe last year that, when he landed a television series that kept him in his homeland Australia for the month of August, it was extremely hard to wish him well. But, those hard feelings have almost passed, and RANDY IS BACK...

From the award-winning puppeteer and co-creator of Sammy J in the Forest of Dreams comes an all-new comedy show starring Randy, the felt-faced misanthrope. The former alcoholic children's entertainer is off the booze and on the wagon this summer, looking at the world through the disgruntled eyes of a reformed boozehound. Its puppet stand-up as you've never seen it before.

Sammy J and the Forest of Dreams won the audiences and critics of 2008, Heath McIvor's last solo show, Randy's Postcards From Purgatory, was the cult hit of 2009, and both shows sold out their entire runs and launched Heath as the Fringe's favourite puppeteer. In Australia, Heath and Sammy J won The Age Critics Award, a Barry Award nomination and a Golden Gibbo Award nomination, and last year they landed the Barry Award with their new show Ricketts Lane, also at the Fringe this summer following a run at the Sydney Opera House. A major member of Australian children's theatre company Polygot Theatre, Heath also has much TV experience, most recently as Fiend in Tiger Aspect's & Jim Henson Company's Me and My Monsters (CBBC).