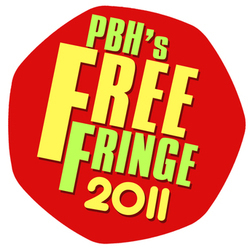 Well, five stars from the Scotsman in 2009, four in 2010 - it's going downhill. Please let it be one star this time, then I can retire with honour, or rather without. I'm aware this says nothing about the show. It'll either be a new one or recycled. Either way, it'll be PBH. Founder of the Free Fringe. Please take that as a plea of mitigation.