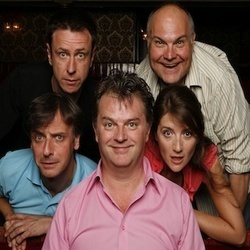 Paul Merton and his highly acclaimed Impro Chums are wonders of nature. Impro Chums take audience suggestions and create cascades of fantastic tumbling laughter. Most of the time. Impro Chums are Paul Merton, Suki Webster, Richard Vranch, Lee Simpson and Mike McShane. 'Every year they bring the house down... a testimony to their brilliance and consistency... you could see this every night and never tire of it' ***** (Mirror). 'These are masters of their craft and there wasn't a dull moment. Terrific fun' (Manchester Evening News). 'A masterful demonstration of improvised comedy' (Daily Telegraph).

Paul Merton, one of the country's funniest and best-loved performers, returns to the Edinburgh Festival Fringe this year with his world renowned Impro Chums.

Paul and his chums, Mike McShane, Lee Simpson, Richard Vranch and Suki Webster will create a new and unique comedy show every single night, based entirely on suggestions from the audience, their own finely honed improvisational skills and an almost manic compulsion to show off.

All the Chums had been improvising with the Comedy Store Players since the mid-1980s, and they still do. The first Chums line-up (Paul, Lee, Richard, Suki and Jim Sweeney) embarked on a joyous tour of India in 2004, earning rave reviews. That spirit and teamwork continues in today's incarnation of the Chums, with Mike McShane. They are a unique, vintage blend of experience and inventiveness. Together on stage they do what they do best, simply because they enjoy doing it.


Paul Merton: A founder member of The Comedy Store Players along with other comedians including Josie Lawrence, Jim Sweeney and Richard Vranch. Paul is a regular guest on Radio 4's Just A Minute. He is also an established face on TV with shows such as the hugely popular Have I Got News For You, Room 101, Paul Merton Looks at Alfred Hitchcock (BBC4/2) and more recently two documentary series for Channel Five in India and China and has just finished filming another series in Europe.

Mike McShane is best known as one of the original crew from Whose Line. He has been to and fro, from America to Britain, Broadway to the West End, with stops in Hollywood in between. He is married to the beautiful and gifted Karen, and is tolerated by an English cat named Henry. He would like to thank his fellow Chums for keeping him sane.

Lee Simpson became a member of the Comedy Store Players in 1987. He is an artistic director of Improbable, one of the country's foremost theatre companies and along with Richard Vranch he wrote and performed with Paul on Paul Merton - The Tour and Paul Merton - The Palladium, he also directed Paul in Paul Merton - And This is Me.

Richard Vranch improvises and writes comedy, and does voiceovers, cartoons and animations. He's had his own Channel 4 science series, made up stories on Jackanory, and appeared on Just A Minute on Radio 4. He loves Mexico and has performed comedy in over 30 countries. He doesn't do music.

Suki Webster is a regular guest of The Comedy Store Players and has toured India, Malaysia and Barbados with Paul Merton And His Impro Chums. She has also written and performed in several critically acclaimed shows at The Edinburgh Festival Fringe. Suki toured the UK and Ireland with Eddie Izzard's One Word Impro and more recently co-wrote (with Paul) the TV documentary Paul Merton Looks at Alfred Hitchcock (BBC4/2).