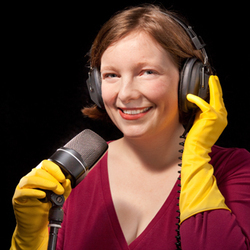 For years Gill Smith resisted her biggest obsession -breaking into song - in favour of tune-free analysis of Obsessive Compulsive Disorder. Now she's accepted her own obsessive toe-tapping and is sharing her inner soundtrack. Join Gill as she saves on psychiatry bills by giving this little sung-about affliction the full rock 'n' roll treatment. It'll have you up and out of your symmetrically arranged seat! Malcolm Hardee 'Cunning Stunt' award 2008. **** 'Always a good comedian to watch' and 'laugh out loud hilarious' (One4Review.com).

Gill Smith is bringing her fourth solo stand up show OCD: The Singing Obsessive to the Edinburgh Fringe Festival, after a successful run at the Brighton Fringe in May.

Following hot on the heels of her 2008 show OCD: My Family and Other Anals, her 2009 solo show OCD: Truly, Madly, Neatly, performed at the Edinburgh Fringe while pregnant, and 2010's OCD: The Next Generation, Gill now gives you another glimpse into the world of Obsessive Compulsive Disorder - this time, in song.

Gill says "I grew up in a household full of 'quirks,' but until I started stand-up, my own and my family's Obsessive Compulsive Disorder moments used to be strictly private. But after the amazing response to 2008's Edinburgh show (also at Henley Fringe 2008 and Brighton Fringe 2009), I got even more fervently fanatical about everyone else's than I was already. It's gone from a faint fascination to a full-on funny foible fixation!"

The show, which is Gill's fifth as part of the Laughing Horse Free Festival, covers a wide range of topics and tunes, covering issues like running late, being overly security conscious, and her favourite new word. And yes, she'll finally be answering the age old OCD question: anti-bacterial handwash, or wet-wipes?

A regular around the national comedy scene, Gill Smith didn't let maternity leave stop her, and an active toddler isn't going to either - just as long as she learns to tidy away her own toys.

What did threaten to de-rail her, though, was discovering, at age 35, she has a little-known learning disability, on a par with dyslexia to its sufferers. In a brutally honest account, see whether her battle with her latest condition makes it a tidy pair, or gets messy and brings on the paranoia too.

"I've been coming to Edinburgh well before I started doing shows, so I just can't imagine the month of August without being here, and being a part of this amazing experience. This is the best month of the year - although part of that may be that the hard work of preparing takes over so much of the rest!"