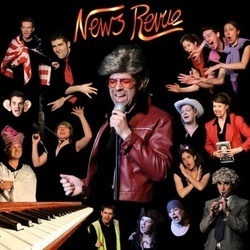 Satire / sketch show performed on the following days in August 2011...

A compilation of the year's best material from the Canal Cafe's London shows. News Revue is a national and international news-based song and sketch show lampooning everyone from the spheres of politics and celebrity. It's performed by four performers plus an on-stage musical director (a post previously held by Bill Bailey). News Revue's exceptional writing, outstanding performances and ever-original takes on current affairs have made it a Guinness World Record breaker, Fringe First winner and a Perrier finalist. 'Truly deserves its place in the Fringe hall of fame' (Fest). 'A rite of passage for all comedy newcomers' (Chortle.co.uk).