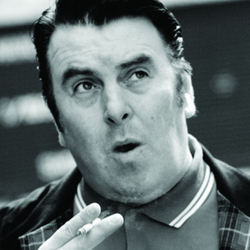 Apparently the end of the world is nigh. Panicking or beyond caring? Here's your final chance to be petty or gain karma points. Join Mick's countdown to extinction, with prizes. 'Impossible not to enjoy' **** (Chortle.co.uk).

Apparently the end of the world is nigh. Panicking or past caring?

After the great success of last year's Edinburgh show, The Missing Chippendale, Mick Ferry is back with an all new show, SOD IT!

If the Mayans are correct, the end of the world is nigh in 2012. Enjoy the Olympics! Here's your final chance to be petty or gain karma points. Join Mick for some fun in his countdown to extinction. You may win a prize.

Mick Ferry is renowned as a fine purveyor of lugubrious surrealism and has quickly established himself as one of the most sought after comics on the British and International comedy circuit. He has been invited to perform alongside stand up luminaries Johnny Vegas, Sean Lock, Peter Kay, Al Murray and Steve Coogan having the honour of joining each of them as a special guest on live shows.

A stand-up since 1998, Mick quickly made it to the finals of So You Think You're Funny, and appeared in the Big Value Comedy Show in 2004. This is his third solo show. He is also a regular performer in The Cutting Edge at the London Comedy Store. In the furiously paced show based on the week's news, Mick honed his talent for off-the-cuff, satirical and topical comedy, wowing audiences with his acerbic outbursts and razor sharp wit.

Mick is also a prolific writer and recently was a writer on John Bishop's Britain (BBC1), he will also be writing for the forthcoming second series, and has previously written for Smalltime (BBC3). He was awarded a writers bursary by the BBC in 2004 and went on to write and perform a pilot for BBC Radio 4; a sketch show entitled Turn Left at the Pier based in the glitzy showbiz world of Blackpool. Other radio credits include Brand Spanking New for BBC7 and Jason Manford & Friends for BBC Radio 2.