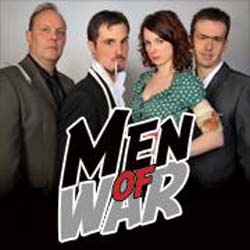 David Schaal is a seasoned actor, well known for playing Jay's dad (Terry Cartwright) in the BAFTA award winning comedy The Inbetweeners. He appeared in all 3 series and stars in the Inbetweeners movie which is due for release on the 19th August. David also played Glyn (Taffy), the warehouse manager, in the BAFTA and Golden Globe award winning comedy series, The Office. He can also be seen in Lead Balloon with Jack Dee and appears in the forthcoming feature films Hysteria with Maggie Gyllenhaal and Ashley Jensen and The Great Ghost Rescue with Anthony Head and Kevin Mckidd. He recently played Eric, the family hitman in the cult feature film Down Terrace, winner of 2010 Raindance Best UK film award. David is also a writer and had a reading of his play, Shame, at the York Theatre Royal this year. He is also appearing in his own play, Brotherly Love, at this year's festival at The Counting House Ballroom with his company The Real London Ensemble.

Gareth Kane is an award nominated writer, stand-up, actor and improviser. He is the founder of one of the UK's leading improv troupes, Scratch (UK Theatresports winners) and produced and starred in the 3 year sell-out production, The Reduced Edinburgh Fringe Impro Show. He also wrote, produced and appeared in the sell-out show A-Team the Musical. He is the resident compere at the Funnyside Club (Chortle best comedy venue winner) and as a new stand-up, was a finalist for the Max Turner award. As an actor he has performed in The Would be Gentleman (Globe Theatre), It Shouldn't Happen To A Dog (West Yorkshire Playhouse), George Orwells 1984 School Disco (Soho Theatre).

Cariad Lloyd is an actor and comedian. She has recently finished a tour of Danny's Deal for Old Vic New Voices and recently toured with sell out spoof gothic horror Is That A Bolt In Your Neck? (Gonzo Moose). Other theatre credits include The Good Guide (Soho Theatre), Movieplex (National Theatre Studio), Ashes (Pleasance). Film work includes Caravan (Baby Cow) and Hallo Panda (Charlie Productions / Film4). She is also a highly experienced improviser, performing weekly at Grand Theft Impro, annually at the London 50 hour improvathon; and guest work with Ken Campbell's school of night and Showstopper! The Improvised Musical. She has also improvised in the US, Canada and Austria. She is currently preparing her debut Edinburgh show, Lady Cariad's Characters.

Stephen Harveyis one half of the Perrier Nominated double-act Toulson & Harvey. He has been performing at the Edinburgh Festival since 2005. He also hosted The Witching Hour, a ghost story Edinburgh favourite with guest stars including Marcus Brigstocke, Shappi Khorsandi, Colin Baker and Les Dennis. His television credits include Channel 4's Nathan Barley by Chris Morris, Broken News (BBC), Trial & Retribution (ITV), and he has recently appeared in Noel Clarke's feature film 4321.