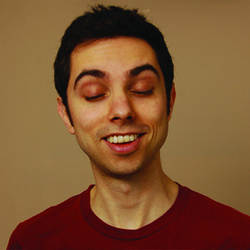 Young people are idiots. Kirshen (from NBC's Last Comic Standing, CBS's Late Late Show, C4's Rude Tube and his own World Stands Up special on Comedy Central) was young once, so he was an idiot too. Luckily he's 31 now, so he's as smart as it's possible to be. Join Kirshen, the internationally acclaimed, award-winning comedian, as he takes you from Helsinki to Sydney, from Interflora to Air India and from PE lessons to the BNP in this brand new hour of stand-up. ***** (Edinburgh Evening News). 'Hugely impressive' (Scotsman). 'A sharp, surreal and often gloriously sick mind' (Metro).

After a hugely successful couple of years touring the world and forging a career in the States, Matt Kirshen is returning to the Edinburgh Fringe with his brand new show Wide-Eyed.

Matt used to know nothing, but now at 31, he knows LOADS more and is as smart as he has ever been. However, he's still an idiot. Join Matt as he explores his own embarrassments, his increasing self-awareness and unashamed enjoyment of realising that actually, he knows nothing and is blissfully worldly naïve.

Matt Kirshen's precision wit has already earned him an impressive reputation on the international comedy circuit. Most recently his appearance as a finalist on NBC's Last Comic Standing has earned him a whole new host of fans in the United States and a surprising number of other countries worldwide. He has also just appeared on Late Night With Jimmy Fallon from New York.

He has also recorded a half-hour special for the World Stands Up, (Comedy Central), and has acclaimed festival appearances at Montreal, Kilkenny, Glastonbury, Reading, Leeds and Amsterdam and has appeared on hit US show Craig Ferguson (CBS).

His debut CD, I Guess We'll Never Know was named in Punchline Magazine's top 10 albums of 2009. Matt has appeared in and written for numerous television shows in the UK, including a charity gala featuring Jimmy Fallon, which resulted in Jimmy himself requesting Matt to open for him in a college tour of the USA (7000 seat venues) to promote his new Late Night hosting slot. He has also just recorded the second series of the critically acclaimed Bigipedia for BBC Radio 4.

His youthful looks disguise a veteran comic with almost a decade of experience, and a wealth of smart, funny and relatable material.