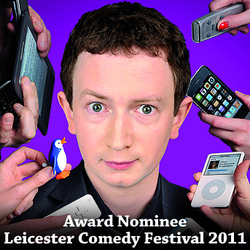 Overwhelmed by life? Constantly distracted? Can't finish a ... ooh what's that? Why do we know more about The X Factor than the financial crisis? And why should we care? This award-nominated show has all the answers. As long as you ask very specific questions. Featuring lots of jokes, a smidgen of politics and absolutely no pictures of kittens. Nominated for Best New Show at Leicester Comedy Festival 2011. 'A stand up audience's dream - an explosion of comedy that leaves everyone in stitches' ***** (ThreeWeeks).

After another hugely successful run in Edinburgh last year Matt Green is back with his fourth solo stand-up show, Too Much Information. Already nominated for Best New Show at The Leicester Comedy Festival earlier this year, this show is sure to be a hit.

Overwhelmed by life? Constantly distracted? Can't finish a... oooh what's that? In this fast-moving world of distractions and diversions, how can we stay focused on what's important? Were things simpler in the past or were people just stupider? Does studying Home Economics for a term at the age of 13 give Matt enough knowledge to understand the global financial crisis? And if not, should that stop him from commenting on it anyway? Why are we obsessed with gossip? And have you seen what she's wearing?

This show has all the answers. As long as you ask very specific questions. Featuring lots of jokes, a smidgen of politics and absolutely no pictures of kittens!

Matt Green's career continues apace, as well as consistently writing new material for new solo shows Matt has been seen on Comedy Cuts, Comedy Showcase, Comedy Lab and other shows without the word comedy in the title including Garth Marenghi's Darkplace, Two Pints of Lager and a Packet of Crisps and the TV Book Club. Radio credits include Inspector Steine, Cabin Pressure, and Ed Reardon's Week.