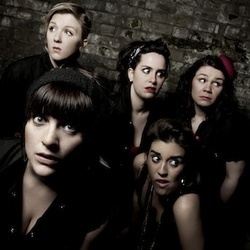 You are cordially invited to (pay to) watch the (self-dubbed) World's Greatest All-Female Five-Person Sketch Group perform their latest offering. Armed with a good range of heights (Camille 3'1 - Rose 8'4) and accents (Eleanor is Northern, Beattie can sometimes do Welsh). Full clean driving licences (except Hannah, but he came out of nowhere). RSVP so we know numbers for the buffet.* 'Britain's funniest women' (Telegraph). 'One of the funniest, clever and sexy sketch groups around' (Time Out). 'Crackles with energy and ideas' (Fest). 'Funny and inventive' (Guardian). *Buffet not confirmed.

The hottest all female sketch group on the circuit, Lady Garden, return to the Edinburgh Fringe bringing their observational, intricately choreographed and often absurd humour back to The Pleasance for another onslaught of sublime sketch comedy.

Full of weird and wonderful nonsense, this enigmatic troupe's brand new show is directed by the award-winning Phillip Breen (Party, Cowards). Combining edgy and often surreal material with energetic, sharp performances, Lady Garden have been likened to luminary shows such as The League of Gentleman and Smack The Pony.

The group have continued their ascendancy in the last 12 months, starring in, amongst others, Dick & Dom's Funny Business and Uptown Downstairs Abbey for Comic Relief alongside some of the biggest names in comedy including Victoria Wood, Joanna Lumley and Kim Cattrall.

Alongside hosting one of the most popular residencies in London that has featured the likes of Lenny Henry and Isy Suttie, Lady Garden have recently completed filming a series of sketches for BBC Comedy Online, and excelled with performances at Latitude, Glastonbury, on BBC Radio 2's The Arts Show with Claudia Winkleman and on Radio 4's Front Row.

Named among Britain's funniest women by The Telegraph, as one of the top five sketch acts to see in the UK by The Independent and receiving The Guardian's tip for best sketch at the Fringe, Lady Garden have certainly proven themselves in past years, and they now return in 2011 to fuel even more superlatives than ever before.