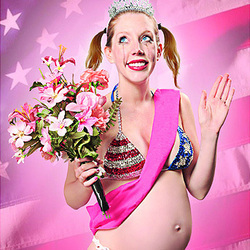 The product of a strict Irish father and a glitzy Canadian 'stagemom', Katherine Ryan won neither friends nor pageant titles growing up. Try as she might to shed her questionable perspectives and super-sparkly nature, she's not sure we can ever truly escape our childhood indoctrinations.

Katherine was the Nivea Funny Women Awards Winner in 2008 and is a fresh and bitingly funny addition to UK stand-up. She recently filmed a role in a new version of Give Us A Clue for Talkback and Freemantle, along with appearances on Big Brother's Big Mouth on E4 and a new pilot for Channel 4 and is currently developing material for a new panel show for E4.

Katherine is also a talented actress and appeared in Routes, which was nominated for three British Interactive Media Awards (including one for Best Online Content), a BAFTA in the 2009 Children's BAFTA Awards (Interactive Category) and also for the 2009 Writer's Guild Video Game Award.