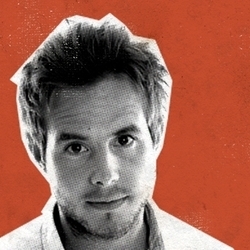 A show about the quest for intelligence and the characters we play in life. Jimmy McGhie returns after two critically acclaimed shows. 'See him now before you have to queue round the 02' (Scotsman), 'A show with real soul and panache' (Chortle.co.uk), 'The perfect little comedy package' (Scotsman).

Jimmy has felt intellectually out of his depth since failing to finish reading The Hobbit in 1991. But cerebral impoverishment forced him to learn how to survive on scraps.

Having woken up at the end of school realising he'd forgotten to learn anything, he managed to busk his way through a number of professional engagements including publishing and science research before running away to join stand-up's low grade circus of disappointment.

Now a professional performing monkey, he feels ready to impart his wealth of experience in a show about pretending to be cleverer than you are.

After reaching the finals of the BBC New Talent competition and performing at the Amused Moose Hot Starlets Showcase Jimmy performed two split-bill stand-up shows at the Edinburgh Festival. He then took his first solo show, Northern Meeting, to the Edinburgh Festival in 2009 and The All-Powerful Warrior Who With His Endurance And Inflexible Will To Win Goes From Conquest To Conquest Leaving Fire In His Wake in 2010.