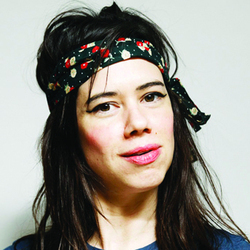 Answering all of life's questions. Plus props. Lou Sanders as seen on BBC3, ITV4 and in your dreams. When you were little and fantasising about what you wanted to be when you grew up... it was probably this show. 'Destined for hugeness', 'Uber-talented', 'Utterly delightful' (Time Out London Critic's Choice). 'Funny bones and that little bit of sparkle that makes a good performer great' (ITV). 'Lou Sanders had the best comic timing ... Genuinely funny jokes' (ThreeWeeks).

Immerse yourself in the world of Lou Sanders, as seen on BBC3, ITV4 and in your dreams.

In Lou's own words, her show is "a shambolic hot mess." It has also been described as "a train wreck... but one you want to be on". Wonderfully erratic, enormously fun and really quite daft.

All this from the girl who tried for her debut show to hire and ride in on a Great Dane - all for a very bad, pun based joke. In How to be Awesome: an Introduction, Lou takes us on a journey that includes expensive pyrotechnics, a destiny reading, delightful tales of her 15-year-old self, her stand-up work experience alter ego Kerry P, and TV's This is Your Life. In no particular order.

A compelling mixture of a young Steve Martin and a nineyear-old girl having a midlife crisis. Putting the show into show-business and the professional into unprofessional.

Lou recently wrote and starred in BBC3 sketch show, Laughter Shock and appeared in Borked (a BBC clip show). She is also the host of one of the flagship comedy shows on Shoreditch Radio.