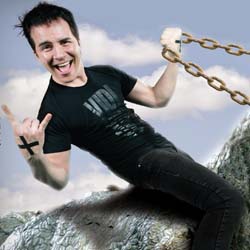 Jokes of the future, today! Hal Sparks is dissecting pop culture, not only because he's annoyed with it but because it points to where we're headed as a civilization! As seen on The Tonight Show and in Queer as Folk, Dude Where's My Car and Spiderman. 'Escapes the American disease by having some worthwhile, consensus-challenging opinions' (Chortle.co.uk). 'Crowd-pleasing yet crowd-stretching too' **** (Times).

US star of film and TV, Hal Sparks makes his debut Edinburgh Festival appearance this year with a brand new one hour show that premieres at the Gilded Balloon for the whole month of August. Hal's show is entitled Hal Sparks: Evolution Overdrive where he dissects pop culture, not only because he's annoyed with it but because it points to where we're headed as a civilization!

Hal is an actor, comedian and heavy metal musician. His TV credits include a leading role of Michael on 5 seasons of Queer as Folk, Dude Where's My Car, Talk Soup, Frasier and Spiderman 2. His numerous other television appearances include The Tonight Show, Larry King Live, Good Morning America, The View, Jimmy Kimmel and MTV. He is a weekly guest / stand in host on The Stephanie Miller Show on Chicago's Progressive Talk show every Saturday.

1. Real name is Hal Harry Magee Sparks III & was born in Ohio but grew up in Kentucky.

2. Has several black-belts in martial arts and presently studies kung-fu.

6. In August 2010, Hal sprung into action to perform CPR on an elderly man who collapsed at the Los Angeles International Airport.

7. He created the hand gesture for his iconic character Zoltan in Dude Where's My Car.

10. As host of the syndicated game show Treasure Mall in 1988, Hal became the youngest show host in history.

11. He appeared as himself in the video for Fall Out Boy's Beat It, the Michael Jackson cover.

12. Sparks was a contestant on the 2008 VH1 television show Celebracadabra, where the celebrities vie to out-perform each other with magic they have learned from their experienced coaches. Sparks coming in second place.

13. Hal is a VIP Advisory Board member of the Marijuana Policy Project.