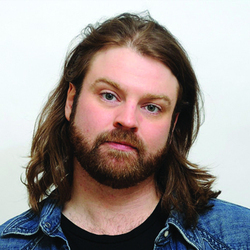 Glenn is one of the pioneers of what is now known as the world circuit. Over the past three years he's been circling the globe with no need for a permanent address. His travels have taken him to India, Australia, New Zealand, Singapore, Hong Kong, China, Holland, Japan, Dubai, Bahrain, Abu Dabi, America, Canada, Indonesia, Ireland, Sweden, Norway, Denmark and Malaysia to name just a few. He's distilled all the experiences of those travels and poured them into a laughter packed hour of straight on honest stand-up comedy.

Thank God. Glenn Wool is back at the fringe.

Picture this. The year is 2008. A delighted Wool has been nominated for the Chortle 'Best Headliner' award along with Jim Jefferies, Michael McIntyre, and Rhod Gilbert. Drunkenly crawling off a flight from Shanghai, he goes directly to the ceremony and loses... to Michael McIntyre.

After spending all night at the bar and vomiting on the bar, the floor, the walls and the stairs of the beautiful function space, Glenn decides he's had enough. Literally and spiritually he goes home.

Back in North America he stops drinking and starts again, then stops again, ad nauseum. Who knows where Glenn would be if he'd stayed in the UK with those other fairly successful chaps from that nominee list? Impossible to know. However, what we do know is where he's been after that. For the last three years Glenn has been travelling the world from Ireland to Australia, via India, NZ, Singapore, HK, China, Holland, Dubai, Bahrain, Abu Dhabi, America, Canada, Indonesia, Sweden, Norway, Denmark and Malaysia, cracking jokes, getting in scrapes with Indonesian customs officers, watching beavers, seeing ufos in Manhattan, visiting the Creation Museum in Kentucky and everything in between.

A pioneer of the world circuit and with no fixed abode, this show will let you peep through the window into a life jam packed with experiences, distilled to perfection and poured into a laughter packed hour of straight up honest stand-up comedy.