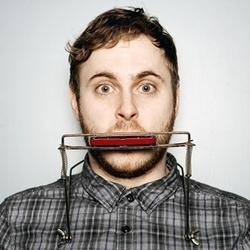 There are predictions that the world will end in 2012, Gareth Richards, 2010 Edinburgh Comedy Award Best Newcomer nominee and co-host on Frank Skinner's Sony award-winning Absolute Radio Show is prepared to stick his neck out and say that it won't. Join Gareth for a show about how the world is going to continue to exist. It will include more engaging observational comedy, inspired one-liners and songs played on the Omnichord, an instrument he has rescued from the 80s. 'Quirkily assured writing, from silly wordplay to melancholic self-evaluation' (Steve Bennett, Chortle.co.uk).

Foster's Edinburgh Comedy Award Best Newcomer nominee 2010, writer of 2010's Dave's 10th Funniest Joke of the Fringe Award and former co-host of this year's Sony Gold Award winning Frank Skinner's Absolute Radio Show, Gareth Richards brings his brand new stand-up show It's Not the End of the World to the Edinburgh Festival Fringe. Following a number of predictions that the world is going to end in 2012 Gareth is prepared to stick his neck out and predict that it won't. He can't see the world ending any time soon, in which case how do we cope with the disappointment that the world is going to continue to exist?

What with all the wars, natural catastrophes, and whatnot, the world can seem like a terrible place to live. Everyone seems to have their hearts set on some sort of cataclysmic event that will end all of humanity, but that's probably because we're a bit worn out and could do with a break. Being alive is tiring nowadays, so total annihilation can seem attractive.

Gareth will be checking the audience for suicide bombers, and telling the story of the day in his life when the world came closest to ending. He will also be performing some songs on the Omnichord, an instrument he rescued from the 1980s, including The Song Where The Jokes Go To Die, a protest song about David Cameron and Nick Clegg (as long as the coalition holds together) and a song about what he'd do if he was one of the last two people on earth.

Join Gareth for a show about how we shouldn't pin all our hopes on the end of the world.

Foster's Edinburgh Comedy Award Best Newcomer nominee 2010 Gareth Richards is probably best known for his two years of co-hosting the Sony Gold Award winning Frank Skinner's Absolute Radio Show, this year he has also completed a Soho Theatre run of his Foster's Edinburgh Comedy Award Best Newcomer nominated show Stand Up Between Songs and appeared on Russell Howard's Good News (BBC Three). At last years Fringe he was placed in the top 10 of Dave's Funniest Joke of the Fringe. In 2008 Gareth was nominated for the Leicester Mercury Comedian of the Year Award, and later won a place as part of the Comedy Reserve. Previously he was a finalist in the Hackney Empire New Act of the Year 2007 competition, and a runner-up in the finals of You Must Be Joking and the Amused Moose Laugh-Off.