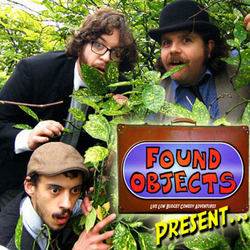 Found Objects are three men who find objects that lead to epic (low budget) adventures. Join them as they perform two different comedy tales each night. Watch as Sam Beckett leaps into Quantum Cheap. Coo at their detective agency in Three Dicks and a Little Lady. Gasp as they discover latent powers in gods vs heroes. Gaze as they learn about piracy in The Arrgonauts. See the past, present and future in Timewarped and feel sick at a zombie love story in Nec-Romancer. Come back thrice to see them all!

Six epic comedy adventures including a time travelling caveman, zombie sex, musical pirates, Gods vs. superheroes, dumb detectives and a Quantum Leap from Sam Beckett! With two different adventures per show you are getting a lot of low budget comedy for your buck! Particularly as it's free!

They have honed their narrative comedy skills in London by writing a brand new adventure every month for a year, for their residency at the Albany and now for their first year at the festival they have chosen six of their best to wow Edinburgh audiences.

On Mondays and Thursdays laugh as the boys start a detective agency in Three Dicks and a Little Lady and gasp as they discover their latent powers in Gods Vs Heroes.

On Tuesdays and Fridays chortle at the impossibilities of time travel in Timewarped and feel slightly sick at Zombie sex in Necromancer.

On Wednesdays and Saturdays guffaw at a piratey adventure in The Arrrgonauts and giggle as Sam Beckett leaps into Edinburgh to put right what might go wrong in Quantum Cheap.

And on Sundays? It'll be a lucky dip. Come back thrice to see them all!