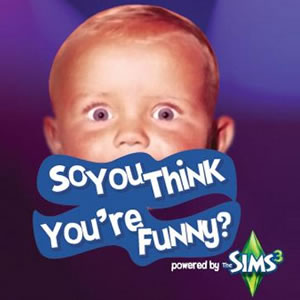 So You Think You're Funny began hunting for the country's best comedy newcomers 24 years ago, and the competition has now established itself as one of the most prestigious new talent stand-up comedy competitions. Past winners include Peter Kay, David O'Doherty, Rhona Cameron, Tommy Tiernan, Miles Jupp, Rob Rouse and Dylan Moran.

This year's winner will not only take away the coveted title but will also receive a cash prize and a trip to perform at Montreal's Just For Laughs Festival. Previous winner Lee Mack will be this year's celebrity judge, with Jarred Christmas acting as compere.

This year the search for the best comedy newcomer took the Gilded Balloon's competition organisers to Bath, Liverpool, Birmingham, Newcastle, Manchester, Glasgow, Dublin, Brighton and London with a selected shortlist going through to perform at this year's Fringe heats.

It's "trial by comedy fire", with comedians given just eight minutes to impress the ever-demanding expert judging panel, who include Karen Koren, Artistic Director at the Gilded Balloon; comedy critic for The London Evening Standard, Bruce Dessau; and comedian Lee Mack.

The finalists tell us more about themselves...

Lucy Beaumont: After a series of unfortunate events I decided to take to the stage. I'm only four gigs in now but I've got the bug and it's becoming hard to concentrate on my day job in Comett. They keep finding me behind the 55 inch tellies, squatting and talking to myself.

Fern Brady: This time last year, as a former journalist, I was interviewing the 2009 winner of SYTYF for the comedy magazine I worked for. I never expected to find myself in the semi-finals of the same competition one year on.

Andy Clark: I'm a Macmillan Carer, which pretty much makes me bullet proof as an audience member. I don't tell jokes at work and I don't wipe bottoms on stage. I am still waiting for Rome to apologise for Wallsend.

Darren Connell: I'm very grateful and excited that I'm in this competition, looking through the history of who has been involved gives me shivers. It's my dream to be a stand-up comedian.

Stuart Hossack: I like playing with narrative and music and the way they interact. I like the shows I run in Southampton, Brighton and Cardiff that are called 'Stitches'. My favourite comedians so far are Will Ainsworth, James Bran and Richard Herring.

Nicola Mantalios-Lovett: I'm a 26 year Greek Geordie with an unhealthy attachment to my dog and a love for all things coconutty. I regularly say horrible things with a sweet smile on my face, some of those things make people laugh.

Dayne Rathbone: I won the RAW comedy competition in Melbourne in 2011 this year. Thank you for giving me this opportunity in the So You Think You're Funny competition in which I also hope that I will win.

Tommy Rowson: I started performing stand-up in October and reached the semis of Amused Moose and the final of the Laughing Horse competitions. I've made many short comedy films, including Arrowman Sam, for GinRiot.com and wine reviews for the infamous SunderDrinker.com.