Fancy becoming an award-winning Edinburgh performer without having to put any effort in? Well, now you can - just buy one!

Last year at the Edinburgh Fringe comedian Robert White won the increasingly-prestigious 'Malcolm Hardee Award for Comic Originality'. However, it did not make him any money. So he has issued the following press release: 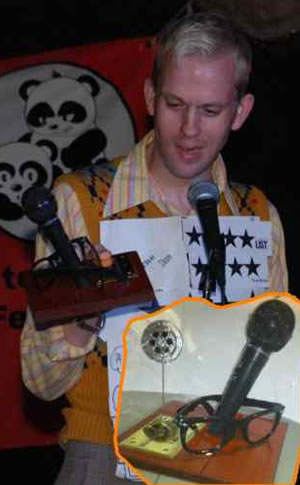 Are you a comedian who's spent shed loads on a show, but can't even get a student reviewer from an online blog to return your phone call?... Fancy an award for your efforts in 2011?!

Are you an audience member that thinks some of those comedians are getting too big for their boots and you could do better?... Well, sure darn as like your boat's come in my friend!

Are you a reviewer, or other such industry person (but NOT a comedian), that's somehow got above yourself and, thinking you've got what it takes to do a show, have stood with your over inflated ego farting into the silence of a dumb-struck audience's disdain, whilst dying on your red-raw hole night after tedious night of banal non-funny un-witty trite anecdotal vomitage?... Well, look no further! I think I've got just the trick!

Are you a man made from cheese living in a house completely of pickle?... Well this is yours for keeps!!!

Are you any person? Are you reading this? Are you you? PLEASE! JUST TAKE IT!!

I did really well in Edinburgh 2010, but got financially spanked. In order to fund next year, 2012 The Curious Incident, I am taking the drastic action of putting my Malcolm Hardee Award on eBay, at the more than generous starting price of 99p (or you can buy-it-now for £1,000,000)

Malcolm Hardee award organiser John Fleming says: "I can't help but feel Robert is angling for a Malcolm Hardee Cunning Stunt Award for best Fringe publicity stunt. Whether he is eligible without a show at the Edinburgh Fringe this year, I have no idea... and I/we make up the rules as we go along. Well, OK, there are no rules... Or perhaps he is really trying to prove that, last year, we should have given him the annual Malcolm Hardee 'Act Most Likely to Make a Million Quid' Award... Watch this space."

Next week is Malcolm Hardee Week at the Edinburgh Fringe, in memory of the late, great godfather of British Alternative Comedy. It includes two debates on comedy, two spaghetti-juggling events and culminates with the two-hour Malcolm Hardee Awards Show on Friday 26th August.