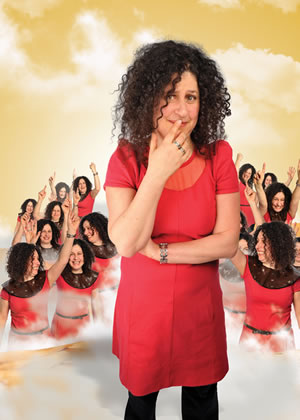 It's about this time in the festival that a lot of comedians start to get homesick. I'm not. Even the steep walk up to my venue is getting easier although I do believe Edinburgh should have installed Stannah stair lifts on the hills, rather than invest in a tram.

My flat in London is very small and this Edinburgh flat is amazing. The living room is the size of a stately home. You could swing a lion in there - I feel like the Fresh Prince of Bel-Air. The only quite creepy thing is the main picture in my bedroom. It's of 'Billy the celebrated rat killing dog performing his wondered feat of killing 100 rats in 5 minutes' in 1822. Nasty. Although 'a hundred rats in 5 minutes' does sound like a fast fringe event. The audience watching is largely posh men in top hats. Is it petty that I counted exactly how many they had in? (Answer 31, but I like to think maybe some got in on 2 for 1s).

The flat has lots of antiquey bits and bobs, including an old hard hat that looks like it was worn to colonise Africa. It's the kind of thing that people put on in films and suddenly get transported back in time to lift the 'curse of the cobra'. To cure slight cabin fever caused by the rain and to cope with pre-show adrenaline, I put it on and tell my flatmate to hit me on the head as hard as possible. It's bloody brilliant; I don't feel a thing.

Juliet Meyers: I'm Not Spartacus! is at 5.40pm at Just the Tonic @ The Store. Listing