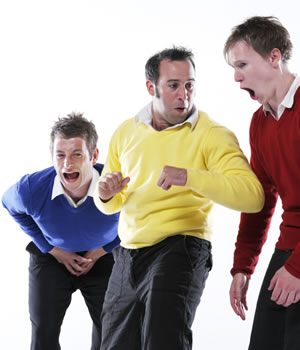 Characterised by their blue, yellow and red jumpers, sketch group Clever Peter are a bit like the Famous Five on acid, minus Timmy the dog. With a Radio 4 series coming soon, they are performing for two nights only at this year's Fringe. Lucy Wood finds out more...

Since forming in early 2008, Clever Peter - collectively William Hartley, Richard Bond, Dominic Stone and Edward Eales-White - have worked hard to get where they are today. With glowing reviews, awards and nominations in the bag, they are looking forward to 2012 and the arrival of a four-part series on Radio 4. But with all their comedy chums in Scotland for the month, they couldn't resist putting together The Best Of Clever Peter for a two-night run.

There are exciting times ahead for this prop-loving sketch group, but, settling down for a good old chinwag with the chaps, the big question is - will they wash the wigs?

"We're coming back to the Fringe this year because, well, we just felt like we were missing out a bit," said Richard. "We'd decided not to bother and then we thought that we could probably fit in a couple of days, so we just, on a whim really, contacted The Pleasance and they had some space, so we thought 'Why not?' It's like Stockholm syndrome."

Punters lucky enough to catch a CP gig are plunged into a world where Enid Blyton meets marauding gorillas and badly-dressed women. It might be an obvious question to ask as a starter, but what is behind the name Clever Peter? "It was a stormy night many years ago... actually, it's a really boring story. We just thought about what a trustworthy name would be. We were really hung over in a café and somebody suggested the name Peter, and then we thought we can't just be called Peter."

Will continued: "We were trying to think of a name for ages. What would happen was we'd all get together and just point at stuff which was directly in our line of vision, and just say those things for about two to three hours. One night it just happened that we were watching DVDs for inspiration, and someone came up with Mystic Peter."

"We nearly got called Ham, Egg and Chips, which was really weird because no one was even near ham, egg or chips at the time," said Richard. "That was a strange one, so we had Mystic Peter for a while and then Clever Peter, which just stuck."

"It fitted with the first year's show," said Ed, "which was that Clever Peter was in Enid Blyton's mind; a dark collection of stories. That was the premise for the show and it worked really well. Then we just assumed Clever Peter for how we worked as a group." 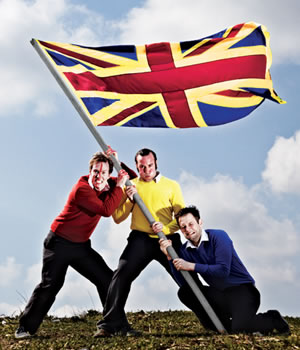 All four create material for CP, with Ed, Will and Richard performing it and Dominic the technical whiz. Will said: "We don't work very well if we're all stuck in a room; we all go a bit mental, so we will bring a fully-formed script, a character or an idea to a session of bouncing ideas around. Then we go away, individually, and write, bring back what we've done and go through it again until we're happy. A lot of it happens in rehearsal as well."

Dominic said: "We're all influenced by completely different things, but for Clever Peter stuff, we have a very clear idea of what we like to produce for people. There is a slight dark undertone to a lot of it, but it's silly dark rather than anything else. For us, it's always about whether it's funny or not. The darkness comes as something we never deliberately write into a sketch; it just happens to be that's what's made us laugh. It always comes out as immature or poorly-planned. If it's just a man hammering someone's knee, it's dark and not funny. You can never do anything just for the sake of trying to shock or something like that; if you do something that's weird, you have to earn it."

"Silliness is our barometer," added Ed. "That's what we do. When we do a good show, we're enjoying it and the audience are enjoying it. If that isn't happening, then something needs to be fixed. Last year's show we really enjoyed and we are looking forward to our two nights in Edinburgh. It's The Best Of Clever Peter but there will be some added extras, such as a new intro. Of course, it's treading ground we've trod on before but we are hoping it really will be the 'best of'."

CP say there are two parts to what they do - with a lot of work in between. The first is having an idea which makes them chuckle, and the second is performing. Richard said: "There is a lot of work within those two points which isn't fun at all. We try and get all that out of the way, and do the work beforehand, so we can have fun. The 'play' element is integral to the humour."

It's inevitable that, when talking to CP, the topic of jumpers - their stage attire - arises. Ed is blue, Will is yellow and Richard is red... and it's all about maintaining that Enid Blyton-esq feel. "We wanted a possibly cartoon-y kind of feel when we performed," said Ed. "We sweat so much in a show anyway, we thought jumpers in primary colours would be the right way to go, and keep them on permanently, because removing them and putting them back on again was too much hard work."

"People then began to talk about it," said Dominic, "and began to identify us with the jumpers and the colours. It proves useful with marketing; we're terrible at that side of things, so the more simple the better. We don't think anyone before has thought of putting red, yellow and blue together - it's pretty ground-breaking, actually." 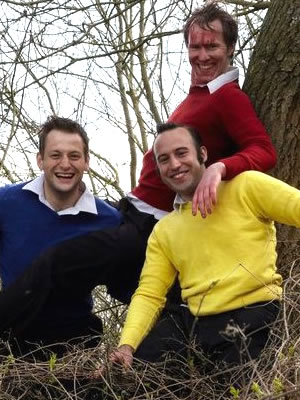 And from jumpers to props. The group make extensive use of props within the material, particularly the same few wigs... over and over again. "One of them's dreadlocked it's been used so often," said Richard. "Something's grown on one of them and we're not sure what it is, but it would be washing away some of the memories if we cleaned them."

Will continued: "We have a prop Ed bought from a 99p Store and God knows why it was ever on sale... it's a phallus-shaped water pistol. We've basically written two sketches based around it; quite frankly, sick. One of them will be in the Best Of show."

So what of their success? Surely they are able to call CP a career these days? "I don't think we've ever had a paid gig," joked Ed. "It's not as if we return from a gig and trawl our way through gold bullion. You really only do comedy and stuff like this for the love of it. It's genuinely hard to keep going. When there's four of you and you only get £60, you know, you could probably live off that but that's it. Our first ever gig was at Falling Down With Laughter and I think he gave us, maybe, £20. We've done a few uni gigs for about £200 and some regional comedy clubs..."

"In short," chipped in Will, "it's really lucrative. We've had a few new wigs, and some jumpers, and some cracking beer. There was a packet of crisps once... oh, some of the nights we've spent in poverty. We've not gone into this to make money. You have to make sacrifices in order to do this. We could all work in marketing. All the time we've spent together has been to create something we enjoy - although going straight to telly would be great."

Clever Peter has awards and nominations, and great reviews, and while five stars are very nice, it's not all about that. Dominic has the fortunate position of being able to hear the audience chatter as they leave a gig, and it's the comments from the punters which mean the most. Richard said: "In our first year, we did the Buxton Fringe and did a gig to 20 opera-goers. As they left, I heard the word 'disgusting'. In our second year, half way through one of our very few tender moments, someone said very loudly, 'I don't know what all the fuss is about, I think these guys are shit'. That was quite a demeaning moment, but you have to admire his candour. That show wasn't going very well but that's harsh." 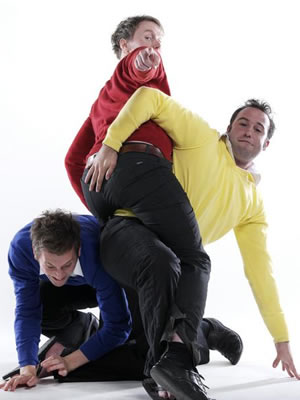 Ed continued: "On the flip side, one time someone came up to us and said, 'I don't really laugh out loud, but I laughed out loud lots at your show'. Also, there is another sketch group who said they really wanted to get into sketch, saw one of our gigs and realised that they definitely wanted to do it."

"They're also dead now. Actually, that was lovely - and one of the nicest things. Professional recognition from those who know how hard it is, is also very nice."

"So when we get round to doing this for a living, we'll let you know - and I'm sure it'll be fucking brilliant!" said Richard. "In the meantime, we'll have to continue grafting. When you're sitting in the pub, talking about running orders, saying hideous things about gorillas going around raping, you catch yourself and think 'this is ridiculous, this is what we're doing with our lives'. The other side of that is when you're dressed as a woman being raped by a gorilla onstage in front of 20 grey-haired opera-going gentlemen, you ask yourself, 'what the fuck am I doing? I could be earning £30,000 working in marketing'."

So where will they be in 10 years from now? Well, the collective kings of Mumbai, it would appear. After a protracted discussion about whether Mumbai has a monarchy, Dominic answers. "It has always been our aim from the beginning to make a funny TV series. We have our Radio 4 series, four 15-minute episodes, which we are recording in November and will be out in about March next year, which is great. It's a completely different writing style. The process is so long and very different to performing to a theatre medium. Shifting is the biggest challenge, and it's very exciting. Hopefully, we will do another series after that and now we are working on putting to paper how we would work on TV, but it's a long process. In ten years' time, I don't think Clever Peter will be over necessarily, but I hope we will have done what we wanted to have done."

Will said: "I hope to be having a cool Corona, having reached the peak of our second award-winning series on a warm beach, ruling over Mumbai, with a great big Alsatian."