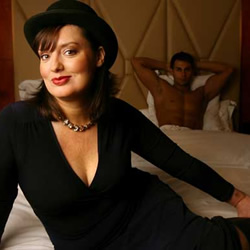 From sell-out Edinburgh start five years ago, through Australia, UK tours and West End residency, Deborah makes a rare return with her hit self-help comedy show packed with inspired advice for both sexes. Ten performances only! Deborah reveals the secrets of sexy. 'Effortlessly funny' (GQ, Comedian of the Week).

Following total sell out 2007 Edinburgh Fringe Festival run Deborah Frances-White is back to reveal everything you ever needed to know about the secrets of being sexy with life-changing show How to Get Almost Anyone to Want to Sleep With You. A brilliant combination of comedy and self-help, the show will have you killing yourself with laughter while you get the inside scoop on what the other sex is thinking, how a hat can help and, ultimately, how any man can become James Bond.

Sell-out monthly shows at the West End's Leicester Square Theatre and festivals around the world have led to numerous audience success stories of increased sex appeal, dating and even reports of a real-life girlfriend from a man who described himself as having "a five year drought".

Packed with solid advice for both sexes, this hilarious show will leave those in a relationship feeling desired and inspired, and those who are single feeling like the sexiest person in the bar who could, if they so wished, go home with anyone.

Deborah Frances-White is the artistic director of top improvisation company The Spontaneity Shop, which recently celebrated its 10th anniversary by selling a TV show to FremantleMedia. She is in high demand as a motivational speaker, appears in MTV's Plain Jane as a guest mentor and has just sold her first screenplay to Fox Searchlight (a romantic comedy, of course).