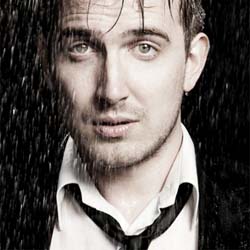 David Reed's anticipated solo debut... a one-man sketch comedy show of new characters and stories. One-third of Fringe favourites The Penny Dreadfuls (BBC2, BBC Radio 4). **** (List), **** (Metro), **** (Scotsman). As seen on BBC2's Fast and Loose and playing Peter Cook on Frankie Howerd's Rather You Than Me.

As one-third of Edinburgh veterans The Penny Dreadfuls - one of the best loved troupes of the recent years - David Reed has toured the UK securing more than 30 five star reviews, penned and starred in two critically-acclaimed series of the Brothers Faversham and the afternoon play Guy Fawkes for Radio 4 starring Kevin Eldon and Miles Jupp, as well as sketches for BBC Three and BBC 7. And now he's gone solo.

The enigmatic talent brings his hotly tipped debut solo show, Shamblehouse, to the 154-seater Pleasance Two in this one-man tour de force. A physical and versatile character performer, known for his sharp, smart and hilarious scripts, intercut with beautiful vignettes and moving interludes, Reed is fast becoming known in the industry as one of the most talented and versatile comedy talents around.

In his debut one-man sketch-comedy show, he invites you to his Shamblehouse, deep in the unknown. A locked-up dream world of strangers, ghosts and mischief. What do we leave behind after we die and what can we hold onto? What does eternity have in store but the sweet release of our own irrelevance? And why do we like dogs so much?

David is one of the best-known faces at the Fringe and one of the most established names in sketch comedy in the UK. Not yet 30, David presents an existential, erudite show, a theatrical feat mixed with clowning, gags and hilarious characters - part Woody Allen, part Lecoq, Reed's show is one of the most highly anticipated among the Fringe programme, and Shamblehouse is set to propel him up the comedy ladder as a solo performer.

He boasts a number of TV credits to his name, both with The Penny Dreadfuls and individually, including BBC1's Fast & Loose, and secured a wave of acclaim when playing Peter Cook alongside David Walliams in BBC 4's biopic of Frankie Howerd, Rather You Than Me. He recently co-wrote Revolution for BBC Radio 4, performing alongside Richard E Grant and Sally Hawkins in the process.

David is also one of the strongest young improvisers in the country. His roots in Edinburgh with improv comedy hotbed The Improverts (which spawned Maria Bamford, Mitch Benn, Kevin McKidd, Miles Jupp), he also performed with The Stand Players, ShamWagon and London based collectives The Spontaneity Shop and Grand Theft Impro.

David is also a talented stage actor and musician. He is one of the core members and drummer in the cult sensation night Karaoke Circus (with Danielle Ward and Martin White), has provided backing to John Hegley, acclaimed cabaret show La Clique and for Jarvis Cocker at the Hammersmith Apollo.