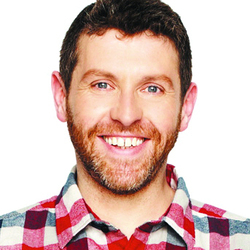 The man behind Edinburgh hits Are You Dave Gorman and Googlewhack Adventure returns to the Fringe. Always one of comedy's most innovative thinkers this genre-stretching performer is back, and for this brand new show he's formed a double act with a projector screen, and they'd like to show you their PowerPoint presentation. Cast your prejudice aside; it's not just for business meetings. 'Gorman has seen his stock rise to such an extent that he's poised, as never before, to make the leap from cult figure to mainstream phenomenon' (Telegraph). Some bullet points will be used.

Dave Gorman returns to the Edinburgh Festival Fringe after eight years with his brand new live show, Dave Gorman's Powerpoint Presentation. This time he is part of a double act... with a projector screen. And they'd like to show you their powerpoint presentation.

Cast your powerpoint prejudice* aside, it's not just for business meetings. . .

A hugely successful live career has seen Dave sell out multiple tours of the UK, have two six-week runs off Broadway in New York extended to three months, complete a successful four-month tour of the USA and become responsible for the fastest selling show in the history of the Studio Theatre at The Sydney Opera House. Live performances have also earned him the title of Best One Person Show at the HBO US Comedy Arts Festival (twice), as well as nominations for the Perrier Award, the Barry Award (the main prize at the renowned Melbourne Comedy Festival), a nomination for a South Bank Award (alongside Eddie Izzard and Little Britain) and two nominations for the prestigious American Drama Desk Award, which he was up against - among others - the legend, Billy Crystal.

A busy 2011 has seen Dave release his fourth book, Dave Gorman Vs the Rest of the World, host his monthly comedy night, Dave Gorman's Screen Guild at the Hoxton Hall, London and headline Dave's One Night Stand for channel Dave. Dave also recently became the Curator on the popular Museum of Curiosity for Radio 4, a role previously held by Bill Bailey and Sean Lock. He continues to present his hit Sunday morning show on Absolute Radio which is also available as a hugely successful podcast and was downloaded over 2 million times during the first five months of 2011. The podcast holds the accolade of being the first commercial radio podcast to rise as high as number 1 in the history of the iTunes Podcast chart.

* Some bullet points will be used.