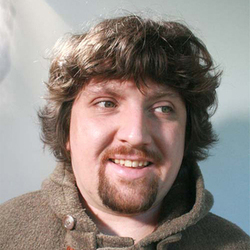 Hello. I was on telly on ITV's Stand Up Comedy Hero. I done a show all about travel and places. I have been called a 'champion of the simple minded' and 'unpredictably funny'. I did supported Milton Jones for one date. Have I been to your town? Funny jokes and talking. 'You could almost imagine Harry Hill doing it' (Ed Byrne).

The critically acclaimed champion of the simple minded, Danny Pensive, returns to the Edinburgh Fringe this August with his brand new show, Danny Pensive's Map of Britain.

Danny loves goldfish, is often mistaken for Paddington Bear, knows the real origin of Geordies and how to grow Spanish oranges. He found a cat in a suitcase, knows the location of the North / South divide, and prefers felt tip pens.

Danny Pensive's loveably offbeat comedy has picked up a cult following across the UK, seeing him described as 'Vic and Bob meets Samuel Beckett' and the 'lovechild of Siadwel and Sarah Millican' (Artsfest). The South Wales Post hailed him as 'a truly inspired comedian. Gloriously deadpan and very funny', and the BBC said he's 'a superb creation, brilliantly done.'

North-East born Danny Pensive is character comedy at its best, and his quick rise through the comedy ranks has taken in an appearance on ITV's Stand Up Hero. He's supported The One Man Star Wars Trilogy on two tours where his encyclopaedic knowledge of all things sci-fi is a hit with genre fan audiences. In 2011, Danny supported Milton Jones on tour, and played to sell out crowds in prestigious venues such as the West Yorkshire Playhouse and The Rose Theatre, Kingston.

In the run up to the Fringe he will appearing at the Udderbelly Southbank Festival, the Buxton Fringe, and will be performing previews across the UK in June and July. Has Danny Pensive been to your town?