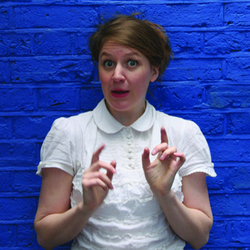 Hilarious character comedy from Funny Women Variety Award winner 2010, Chastity Butterworth is the delightfully incongruous creation of actress and comedienne Gemma Whelan. Chastity will talk to you about Zumba, Primark and her best friend, and protégé, Graham. Special guests will feature and so will an acrostic competition! Go and see this lady as she's going to be big news and then you'll have to pay to watch her. 'A female Tim Vine with a persona akin to emotionally frigid posh-boy comic Will Smith ... most impressive' (Chortle.co.uk). Free.