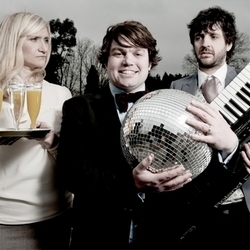 Award winning stand up Charlie Baker returns to the Edinburgh Festival Fringe this August with a brand new comedy play, Wedding Band, inspired by his very own experiences of that most romantic of occasions.

Previous to the glamour of being one of the UK's most popular comedians, Charlie would travel the lengths and breadths of the country to sing on what is supposed to be the most magical day in one's life. From St Ives to St Andrews, Charlie and his troupe have seen the highs and lows of that perfect day, and they are brought to life in this amusing, warm and touching play at the Gilded Balloon.

Charlie is one of the most highly rated performers in the country, with the acclaimed jazz singer and musician winning the BBC's Let's Dance for Comic Relief series earlier this year and raising £1 million in the process. He has played a wide range of roles on the small screen, including Phil in The IT Crowd, and appeared in Dr Who in June. He's also a regular panellist on shows including Never Mind the Buzzcocks and Richard Bacon's Beer and Pizza Club and has appeared on Improvisation My Dear Mark Watson, The Rob Brydon Show and was invited to perform a set as part of Comedy Central's series The Comedy Store.

Charlie has established himself as a favourite at the Edinburgh Fringe, with his debut show, The World's Greatest Show Off, garnering critical acclaim and earning the Torquay-born comic a Mervyn Stutter Spirit of the Fringe Award.

He is one of the highest regarded stand-ups on the UK comedy circuit, regularly performing and emceeing at the major venues including The Comedy Store and for the leading promoters such as Off The Kerb and The Glee Club.