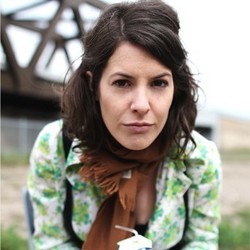 Bold, bonkers and highly nutritious character comedy. Packed with brand new, wickedly comic creations, this is a high octane, low-carb bonanza of a show. You'll be so comically-sated by the end of it that you'll probably have to lie down. NB Packed lunches are not included in the ticket price. But you're welcome to bring your own, if you like. It's up to you. 'Steals every scene' (Chortle.co.uk), 'Bubbly, naughty, engaging fun' **** (ThreeWeeks), 'Fluid comedy genius' **** (Scotsgay), **** (Fringe Review).

As one third of hugely popular sketch group The Boom Jennies, known for their fast-paced, boisterous and surprising brand of sketch comedy, Catriona Knox has won herself many fans who delight in her odd-ball character creations.

Last year, Catriona's mini-show on the Free Fringe was packed to the rafters every day; this year she brings her debut hour to the Fringe with a collection of brilliantly observed personalities, brought to life by some cunning and devious writing. Clever, kooky and inspired her performances are memorable for their softly barbed execution as well as the strength of her material.

From an unhinged divorcee, to a wonderfully observed tealady, via an absurdly precocious child star and a nervous blind-dater, Catriona's show is packed with brand new wickedly comic creations, who veer from the slightly peculiar to the highly disturbing. Sometimes you can very nearly believe they're real, until they stumble into fantastically odd territory.

Expect subversive humour, expect huge amounts of laughter, expect a punch-up with a cuddly toy, a heartfelt song of teenage angst and some walking boots.

NB: Packed lunches are not included in the ticket price. But you're welcome to bring your own, if you like. It's up to you.