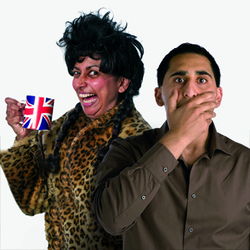 A cheeky double-bill from Tamasha - producers of the hit comedy East is East. Auntie Netta makes her world premiere as the bawdy asylum seeker, regaling us with the story of her arrival in the UK, the wonders of Hadrian's Wall and the mysteries of Venezuelan bikini waxes. The Trouble With Asian Men is the revealing verbatim comedy, which has played to sell-out houses across the UK. Look out for special guest stars in this new Festival version! 'Highly entertaining ... enough to make you snort with laughter' (Guardian).

Tamasha - the producers behind British hit East is East - present a cheeky double-bill of new British Asian comedy. Brand new character sensation Auntie Netta provides her unique take on Britain and the British in Auntie Netta's Holiday for Asylum, whilst hit show The Trouble with Asian Men relays real-life interviews that get to the heart of the men of its title, featuring nightly special guest stars.

Written & performed by Nimmi Harasgama. In a world premiere, bawdy asylum seeker Auntie Netta reveals her unusual journey and brilliant take on Britain, from the people, politics and situations she encounters, to the mysteries of the 'Venezuelan' bikini wax. Auntie Netta has landed in the UK and she's on a mission to enjoy her 'holiday' whilst seeking asylum. Driven by Auntie Netta's skewed perspective and biting wit, the show is a fresh and funny satire on being an outsider in the UK.

Auntie Netta is an internet phenomenon and the host of a popular TV chat show in Sri Lanka. She has recently performed at BAC and for Funny Women at the Royal Festival Hall.

Nimmi Harasgama is an emerging London-based Sri Lankan comedian. Auntie Netta: Holiday for Asylum was first seen at Tamasha's Start Night at Hampstead Theatre in 2009. Supported by a TDA bursary, it then played to roaring success at BAC's Scratch Festival, before taking part in the Funny Women competition hosted by Shazia Mirza in 2010. The show's Associate Director is Amit Sharma, an artist who is also part of ongoing training and support through Tamasha's Developing Artists programme.

The Trouble with Asian Men

Performed by Divian Ladwa and Amit Sharma (with special guests stars to be confirmed), and created by Sudha Bhuchar, Kristine Landon-Smith & Louise Wallinger. Created entirely from interviews with members of the public, Tamasha lifts the lid on the modern-day Asian man in this revealing and hilarious verbatim show. The Trouble with Asian Men reveals the experiences of British Asian men in their own words and the words of those around them. The result is a vital, tender and amusing insight into what they are really like behind closed doors. The show has already enjoyed huge success on tour and now premieres a new version in Edinburgh with new Scottish interviews and featuring special guest stars.

Tamasha means 'commotion', creating a stir. The company seeks to fearlessly investigate personal stories of cultural difference and connection as rich and radical sources for theatre. It aspires to theatre that has the multiple narratives and global perspectives of Britain's evolving culture and audiences at its heart. Tamasha aims to shape and challenge the mainstream and enable, create and deliver innovative art: propelling today's unknown talent to become tomorrow's leading artists.

Tamasha was founded in 1989 by director Kristine Landon-Smith and actor/playwright Sudha Bhuchar, and has since been discovering and developing emerging artists with major successes including playwright Ayub Khan-Din, whose play East is East went on to be produced as a smash-hit film, paving the way for other Asian stories into the mainstream. The company's most recent visits to Edinburgh Festivals were at the Edinburgh International Festival with its theatre productions A Tainted Dawn (1997) and Strictly Dandia (2003).